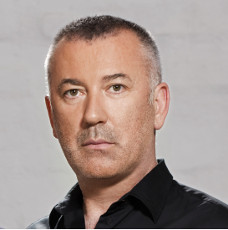 Ivica Buljan was born in 1965 in Croatia.

As director and dramaturge, he is deeply interested in modernist dramatists and poets, such as Marina Tsvetaeva, Pier Paolo Pasolini, Heiner Mueller, Robert Walser, Elfriede Jelinek, Miroslav Krleža, Boto Strauss, and Bernard-Marie Koltès (who represents the focus of his authorial interest).

He has worked as a guest lecturer at Académie expérimentelle des théatres in Paris, Brussels, and Moscow. He has also taught at the La Mamma School lead by the famous director Ellen Stewart in New York.

He is a professor at National Theatre schools in Saint Etienne and Rennes in France.

In the period between 1998 and 2002 he was the director of the Croatian National Drama Theatre in Split.

He is the co-founder of the theatre Mini teater in Ljubljana and the founder and artistic director of the World Theatre Festival in Zagreb.

For his work he received a number of prestigious awards: Dubravko Djušin Award (1997), Petar Brečić Award (1999), Peristil Award (2001, for Oedipus), Borštnik Diploma and a special award from the jury (2004), Grand Prix of Tempus Art Festival (2004) and the medal of the City of Havana (2005), the Golden Lion for best performance (Hamlet, 2006, The Drama of the Princesses, 2007), two Borštnik Awards for best Slovenian performance (Oedipus, 2007, Macbeth after Shakespeare, 2009) and many others.